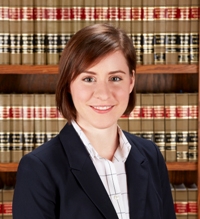 Sarah grew up in Frankfort, Kentucky. In 2009, she graduated summa cum laude from DePaul University with a Bachelor of Arts in Political Science. After undergrad, she was selected to join Teach for America and spent the next two years teaching literature to middle school students in rural Louisiana. She returned to Kentucky for law school, obtaining her Juris Doctor degree from the University of Kentucky College of Law in 2014. While in law school, Sarah served as the Editor-in-Chief of the Kentucky Law Journal and was a law clerk at PPOA during both summers. Upon graduation, she spent one year as a law clerk to the Honorable Joseph M. Hood in the U.S. District Court for the Eastern District of Kentucky, before joining the firm in 2015.

In her spare time, Sarah enjoys volunteering as a Big Sister for Big Brothers Big Sisters of Kentuckiana.

Sean Ragland and Jack Phillips successfully defended two hospitalists and their practice after an in-patient, 64, suddenly lost vision and seized. After transfer to a higher acuity hospital, neurologists ultimately diagnosed her with Posterior Reversible Encephalopathy Syndrome, a rare neurological condition that was only discovered in the last 25 years. The PRES did reverse, and […]