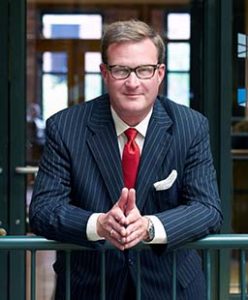 Sean began his career as an associate for Boehl Stopher & Graves. From 1992 until 1997, he successfully litigated to jury verdict multiple personal injury cases under the guidance of the lawyers who would later form PPOA. For the next eight years, Sean operated his own firm handling a wide variety of cases, continuing his active litigation and trial practice. Sean returned to his mentors at PPOA in December, 2004.

Sean currently focuses his practice in the defense of cases in the fields of medical malpractice, products liability, premises liability and employment discrimination. Sean is licensed to practice in the federal and state courts of Kentucky.

Sean Ragland and Colleen Davis successfully defended a social worker and her employer, a behavioral health facility, at trial in a tragic suicide case. A fourteen-year-old girl from an extremely abusive home was residing at a residential treatment center. The girl was sent to the emergency room after a self-harming incident that the Estate characterized […]