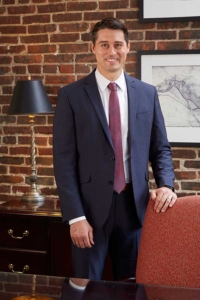 Matt joined Phillips Parker Orberson & Arnett, PLC, in October 2009, after obtaining his Juris Doctor degree from the Louis D. Brandeis School of Law at the University of Louisville. While in law school, he was a published member of the University of Louisville Law Review, competed in the Saul Lefkowitz Moot Court Competition, and was a member of the distinguished Brandeis Inn of Court.

Matt was born and raised in Waukesha, Wisconsin. He attended Marquette University for his undergraduate education and received a Bachelor of Arts in Political Science. While at Marquette, Matt was a four-year letter winner on the Track and Field team and two-time MVP. As a senior he was elected captain, captured the Big East Conference championship in the decathlon, set the school record in the decathlon, and competed in the NCAA National Championship meet. Matt was also awarded the Cura Personalis Award in 2006 for his commitment to excellence in academics, athletics, and leadership through service to others.

In his free time, Matt enjoys spending time with his wife and chasing his three young children. He also enjoys running, basketball, softball, throwing the javelin, and supporting the Milwaukee Brewers, Milwaukee Bucks, and, especially, his Green Bay Packers.

Trial counsel defending a medical negligence action against hospital and hospital operative/nursing staff. The Plaintiff claimed that the negligence of the nursing staff in performing their duties, including their sponge count, caused a large piece of a surgical laparotomy sponge to be retained in the Plaintiff’s chest cavity. The Plaintiff allegedly required multiple surgeries before passing away. The Plaintiff claimed over $2.6 million in damages. Succeeded in striking over $850,000 in past medical expenses damages on directed verdict, followed by the jury returning a complete defense verdict.

Litigation and appellate counsel successfully obtaining summary judgment at the trial court and defending that summary judgment at the Kentucky Court of Appeals. The Plaintiff claimed she slipped and fell outside of the hospital. She claimed that the hospital failed to maintain their premises in a reasonably safe manner, failed to warn of dangerous conditions, and failed to have proper policies and procedures for safety, including identifying and correcting unreasonably dangerous conditions. The Plaintiff allegedly suffered a serious knee injury, developed reflex sympathetic dystrophy syndrome, and was unable to continue working. Damages of $8.95 million were sought, including $5 million in punitive damages. Depositions of the Plaintiff and Plaintiff’s witnesses, presentation of hospital personnel, and obtaining expert slip resistance testing of the subject surface set up motion for summary judgment on liability, which was granted. The Plaintiff appealed. That appeal was successfully defended and judgment for the Defendant was entered.

Trial counsel defending motor vehicle action against client in a rear-end accident. Fault was admitted. Two Plaintiffs claimed significant neck and back injuries, requiring surgery. They claimed over $540,000 in damages. The jury returned a verdict amounting to a judgment of just $16,500.

Trial counsel defending a prominent local attorney against a claim of legal malpractice. The Plaintiff alleged that the attorney breached the standard care in negotiating a divorce settlement. The Plaintiff sought over $375,000 in damages. The jury returned a unanimous defense verdict.

Trial counsel defending motor vehicle action against client in side-swipe motor vehicle accident. Client-Defendant fled the scene, was incarcerated, and did not attend trial. Fault was admitted. The Plaintiff claimed significant injury to his neck and over $115,000 in damages. The jury returned a verdict for just $5,000 of the Plaintiff’s medical expenses and nothing for pain and suffering. Accordingly, a judgment for the Defendant was entered.

News from Matthew A. Piekarski

Matt Piekarski and Bobby Whitmer obtained a zero-liability defense verdict on behalf of a restaurant in a premises liability case in the United States District Court for the Eastern District of Kentucky at Lexington. The Plaintiff, a recently retired kindergarten teacher and customer of the restaurant, slipped on engine oil spilled in the parking lot […]