My legal education began in earnest on June 1, 1981, the first day I reported to work as a new lawyer at Boehl Stopher Graves & Deindoerfer. Not coincidentally, that was the day I met Bill Guethlein. If there was a better place to learn how to become a trial lawyer than BSG&D in the mid-80s, I can’t imagine it. I was influenced greatly by many fine litigators who were then practicing at or near their prime: Joseph Stopher, Ray Harmon, Galen White, Ed Stopher, Doug Morris, Don Darby, and Bob Stopher. But I had only one mentor, and my nearly 20-year association with Bill Guethlein continues to influence me daily. 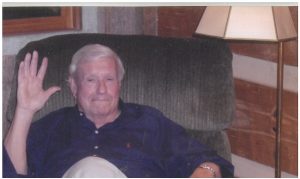 If you are familiar with even a few of the names in the last paragraph, you know what a talented and almost comically diverse group of individuals they were. I could roam up and down the halls picking and choosing my advice from a smorgasbord of some of the best legal minds I’ve ever known. But when I needed to understand human nature — the first and last job of a successful trial lawyer — I parked myself in Bill’s office, and I have never left.

Before I can tell you how Bill has influenced me and many other young lawyers who have worked with him, you have to know something of Bill’s background. It’s a rich, interesting story that I prodded out of Bill in bits and pieces over the years. Whenever possible, I’d pick up a stray fact from someone who has known him longer. As far as I know, it’s mostly true.

By the time Bill became a lawyer in 1950, he had already been an indifferent student, a soldier, a lifeguard, a bartender, a bouncer, a floor-walker in a ladies store, and an apprentice glass-blower. These jobs, and a healthy enjoyment of life, were Bill’s real legal training. He held his next job, at BS&G, for 49 years, retiring from the partnership in the spring of 1999. When Bill started work, the firm’s attorneys served as little more than claims handlers for its insurance company clients. That quickly changed, and Joe Stopher, Ray Harmon, and a young, green Bill Guethlein started trying cases. Lots of them. More than those of us who came of age in a post-No-Fault, high exposure environment can comprehend. I’m not sure how much of this I believe, but I have heard too many of these stories from too many sources to chalk this up to pure nostalgia. Bill had 15-20 trials scheduled each month. Eight to ten of these might be tried. He would often meet his witnesses for the first time on the morning of trial. He could still have a jury out in one court when he walked across the hall to start another case. Stuff like that. Bill was quick to point out that these cases were not huge ones by today’s standards, but a jury trial is a jury trial in my book. All of you who consider yourselves to be trial attorneys, think how long in today’s environment it would take to handle 30 trials. By age 30, Bill had seen everything that could happen in a courtroom. While the stakes would continue to rise throughout his career, while the names and faces of judges, parties and adversaries would change, human nature didn’t.

And the stakes did rise. Over the next three or four decades, Bill faced all comers. He tried vehicular accident cases, railroad cases, product liability cases, and, most frequently, professional liability cases. He tried cases against everyone. Not only against the prominent, local plaintiff’s attorneys of his day, but also against national hired guns who were shipped in to tackle him, such as Stanley Prizer and Phil Corboy. And he was almost uniformly successful. I do not mean to imply that Bill was undefeated at trial, but true losses could be counted on the fingers of one hand with room left to spare. Nobody in Louisville has ever had a civil trial practice for a longer period of time, at a higher level, with more success, than Bill Guethlein.

Bill could be a terror in deposition, but his disposition in trial was invariably sweet, charming, and self-effacing. This is almost impossible to pull off for most trial attorneys, usually because the deposition persona reflects their true personality. The opposite was true for Bill. Juries sense this, and they reward and punish accordingly.

Still, Bill Guethlein in trial could be a handful. After making a particularly important point during opening statement, he might unexpectedly turn to opposing counsel and say, “Isn’t that right, Charlie?” I’ve seen him fish a piece of chalk out of his coat pocket, drop to his knees in front of the jury, and sketch out a floor plan on the courtroom carpet, explaining as he went while the judge and his adversary eyed each other but never said a word. Bill contributed significantly to Kentucky case law on what can — and cannot — be said in closing argument.

One of my favorite trial stories involves a multi-party, catastrophic brain-injury case. On the third or fourth day, I stuck my head in the door of the courtroom in the old Hall of Justice and saw all of the parties and their attorneys jammed practically on top of each other in a row of council tables, but there was no sign of Bill or his client. I returned to the office and told his secretary that he must have settled or received a directed verdict, but she assured me that he was still in trial. I later found out that he had hung back when the co-defendants had rushed to stake out their places, and then Bill and his client joined the judge on the bench where they sat throughout the two-week trial.

Bill lived and worked hard during those years. The out-of-court stories from that period are legendary. For those of you now scanning nervously ahead, you can relax, I can’t tell any of those stories here for a variety of reasons. Too many people are still alive.

In some ways Bill was an unconventional mentor. Certainly, he was no saint. It could never be said of him, as Disraeli said of Gladstone, “He has not a single redeeming defect.” On the contrary, Bill was all too human and a man of many paradoxes. For example, Bill was — how can I put this delicately — something of a ladies man, perhaps even a rake. In most respects when it comes to women, Bill was very much a man of his generation, and his language was anything but politically correct. Yet Bill took a genuine interest in promoting the careers of multiple female litigators. I’m not talking about just as proteges but also as colleagues.

Bill presents other paradoxes as well. He was never a natural father, but he adopted his first wife’s children and raised and educated step-children from his second marriage as well. He was a surrogate father to a dozen or more young lawyers. A legal mentor cannot and should not be a parent. But the depth of feeling which results on both sides can approach that relationship.

More paradoxes: Bill Guethlein never allowed his name to appear in the title of a law firm, but he was a principal partner in one firm for decades and served as the unwitting inspiration and godfather of our firm where he worked as Of Counsel. He had a reputation as a tough guy, which never ceases to amuse those of us who worked with him. He was a self-described “fallen Catholic” who spoke wistfully of his faith. Bill was an unconventional mentor, but not in any way that is important.

Bill had less ego than any successful trial attorney I have ever known. Given the competition, that statement might not mean a lot on its own, but Bill was truly a humble man. He considered it a privilege to practice law and a damned fine way to make a living. He seemed mystified that clients ever returned to him, much less remained loyal to him for decades. He always practiced as if he expects someone to come into his office and tell him to clear out, that the jig is up, that he does not deserve the success he has earned.

Bill was the quickest and most uncanny judge of character I have ever known. He was an accurate, unsentimental, and unsparing interpreter of human conduct. I cannot decide if this quality was honed by his trial practice or if his success as a trial lawyer was a result of it. One day my partner John Parker and I were debating the trustworthiness of a certain lawyer in Bill’s presence, hoping he would offer something to help clarify what we should do. Bill let us argue for a while, apparently uninterested, then during a lull, he peered over his glasses and said, “Watch him. He has rubber pockets so he can steal soup.” A different adversary was “so honest you could shoot craps with him over the phone.” The highest accolade from Bill, rarely bestowed, was someone described as “an honorable man.”

The greatest gifts a mentor can bestow are confidence and opportunity. Bill Guethlein never sought to enhance his reputation — or protect it — at the expense of a subordinate. In nearly 30 years, I never heard Bill raise his voice to a young lawyer. Ever. God knows we deserved it. I mean really deserved it. Malpractice, bonehead mistakes, colossal errors in judgment, you name it. Bill understood that the ego of most developing litigators is a fragile and delicate thing even when outward appearances belie it. Bill routinely took the blame with clients for our bad outcomes or mistakes while giving us complete credit for good results. He supported our exercises of judgment while still shielding us from the harshest consequences of them.

Confidence, and talent for that matter, mean nothing without a meaningful opportunity to use them. Good mentors don’t seek to recreate themselves. Bill didn’t need or want us to be his clones. Young attorneys under Bill were allowed and encouraged to have direct access and personal relationships with his clients. We were delegated responsibility, not just tasks, as soon as possible. We were given files, cases, clients to develop under his general supervision, and we knew he would back us up. It was thrilling and life-altering. And the mentor hopes that in time, with confidence and opportunity, comes judgment, experience, and success.

Shakespeare wrote about another unconventional mentor. In summing up his career, a comrade reminisces, ‘That thou hadst seen that that this knight and I have seen!” To which the knight replies, “We have heard the chimes at midnight.” To hear the chimes at midnight, one must work a full day and appreciate life to the fullest. Bill Guethlein did. Being fully human, he knew he was fallible, and he could quickly recognize this in others. This made him a successful trial lawyer, but his ability to overlook such weakness outside the courtroom made him a successful human being. His ability to inspire us to achieve despite our shortcomings made him a wonderful mentor.