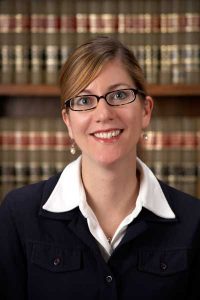 Tera joined PPOA in July of 2003; her practice primarily involves medical malpractice defense. She defends both hospitals and physicians against claims of medical negligence. She has had the opportunity to defend individual and corporate clients in over 30 criminal and civil jury trials, most of which resulted in defense verdicts.

After graduating from law school, Tera moved to Louisville and served as a Jefferson County Public Defender for two years, representing indigent clients charged with offenses ranging from misdemeanor theft to murder. After leaving the Public Defender’s Office, she joined a small firm specializing in domestic relations and also did appellate work for the Department of Public Advocacy. From 1999 until 2003, Tera was an associate at Woodward Hobson & Fulton, practicing primarily products liability defense and medical malpractice defense. She was actively involved in defending Wyeth in the Phen-Fen national litigation.